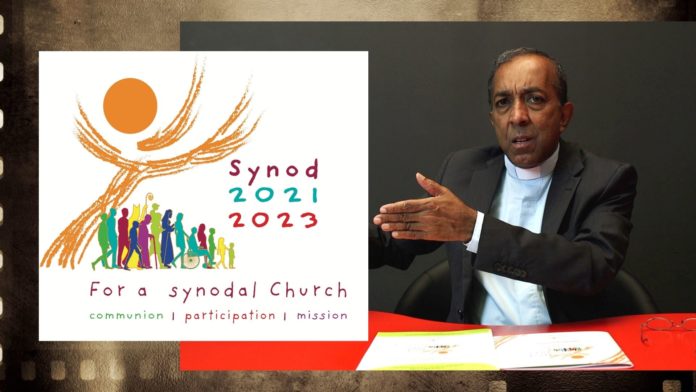 Fr. Vimal Tirimanna, C.Ss.R., member of the Theological Commission for the Synod on Synodality, in the interview for Scala News shares his impressions from the opening ceremony on October 9-10. He explains the synodal process and its relevance for our Redemptorist Congregation.

Fr. Grzegorz Ruszaj (Scala News): Father Vimal, last Saturday, you were present at the Vatican at the inauguration of the Synod of Bishops. What are your impressions?

Fr. Vimal Tirimanna: In fact, I went there, as you know, as a member of the Theological Commission appointed by the Vatican Secretariat for this synod, and my impressions were very, very impressive.

It was not only I who participated as a Redemptorist. Our father General, the Superior General Father Michael Brehl, was there as one of the members of the Council of SuperiorsGeneral, as its Vice-President, and also the Preside of the Alphonsian Academy, Prof. Alfonso Amarante, for the inauguration of the Synodal process.

First of all, the whole aula of Paul VI was full not only with cardinals and bishops and priests and theologians but with so many laypeople. In other words, what are we saying here? The whole People of God that is the whole Church. As the Second Vatican Council said, the Church is the People of God. That is, not only the hierarchy, but all the baptised, and they were there.

The entire aula or the hall was electrified when Pope Francis entered. He entered, as usual, in his usual simple way, and his discourse was excellent.

The Pope was insisting, as usual, the importance of listening to all the People of God, that is all the baptised people. That’s why the theme of this synod is: “For a Synodal Church: Communion, Participation and Mission”. Communion, Participation and Mission! Accordingly, the importance is to listen to the people, all the baptised. And the Pope said clearly to the bishops – he was quite harsh – he said: “Dear Bishops, brother Bishops, don’t try to tell during this process – which will last for two years – don’t try to tell, ‘Oh, we have done it always this way’ or ‘We don’t need any new way’ or ‘I don’t have time’! All of us should find time for this to listen to the Holy Spirit by listening to one another”.

The synod will last for two years. Last weekend, all the local churches started the diocesan level of this synodal process. In this phase, the local churches, that is, the parishes, dioceses, Bishops’ Conferences, and religious Congregations and communities, including our own Redemptorist communities, will have to begin the same process. By definition, a synod means – as the Pope is very fond of continuously saying – walking together, walking together as the People of God, we have to walk together!

Fr. Grzegorz: And now father Vimal. You are a member of the Theological Commission for the Synod. Would you please give some comments on that?

We are 25 members altogether, and as you know, I am from Sri Lanka, a Redemptorist, of course. From Asia, there are only three – Professor Thomas Kollamparambil from India and Professor Estella Padilla from the Philippines, and I am the third one. So, these 25 members of the Commission are expected to help the Vatican Secretariat for Synods during this process from this month till October 2023. Till then, we are supposed to accompany the local churches, especially, the lay people because people have a lot of questions about this process.

You know, one of the main things that we had to do was to draft two documents which we began last June. Of these two documents, one is the Preparatory Document which all the Bishops’ Conferences, the Bishops, parish priests, and other community leaders were to get. And then, the Theological Commission also prepared what is called the Vademecum, that is, a handbook that tells clearly, how to go about this synodal process during the coming two years.

We had a sort of a synodal experience during the past three or four days. The Theological Commission was meeting, and it was very hard because suddenly one will say this, another one will say something else! At times, we were not sure where we were going! And Cardinal Mario Grech, who is the President of the Vatican Secretariat for Synods, was very gracious in encouraging and reassuring us, often saying: “Don’t worry, there will be disagreements, there will be confusion, but do not forget that we are on a synodal journey. We have to walk together! We have to listen to everybody”.

So, we in the Theological Commission are called to assist the local churches, to assist the People of God in their synodal journey. In their journey, towards what?! Towards communion participation. Why? For the mission.

I see here, if you don’t mind, a great similarity with our own Congregation because everything is done for the mission.

Fr. Grzegorz: Fr Vimal, you mentioned the Redemptorist Congregation, our congregation! We have just started the preparation process for the twenty-sixth General Chapter. Do you see any relevance in this process with the synodal process? Is there any parallel between them?

Fr. Vimal: How will the synodal process affect us? I think that it has great relevance and there is a close parallel. I hope I was clear in my explanation earlier. It is a question of decision-taking and decision-making in the universal and local Churches, not only by the hierarchy or by the Pope. They need to consult the rest of the People of God, in such decision-making and decision-taking. Of course, the last decisions they have to make, they, the hierarchy have to take. Everybody cannot make or take decisions. Let’s accept that. But everybody has to be listened to.

In fact, both Father General Father Michael Brehl and I were having a long chat just before the Papal Mass last Sunday at St.Peter’s Basilica. I casually told him “I think that we should introduce this synodal process in our Congregation!”. He said, “What do you mean? We have already begun it, but we have to intensify it, namely to get the whole membership involved in our CSsR way of life”! In other words, to consult all the confreres and get them to participate in the affairs of the Congregation!

So, I will finish here by saying: Yes, there is a parallel; there is great relevance in this process for our forthcoming General Chapter. In fact, Vatican wants each religious Congregation also to introduce this synodal process into their particular way of life. But we will be having the General Chapter in 2022, that is, before the Synod of Bishops in 2023. So, I think if we, as a Congregation, can give a prophetic lead, we may be able to tell the rest of the Church: “what you all are talking about, we are doing already”…, if we can do that, namely, to be in communion with each other.

(The interview was done on Thursday, October 14 in Rome. This is its shortened and edited version, authorised by Fr. Vimal Tirimanna. The full version of the interview is included in the video recording below)