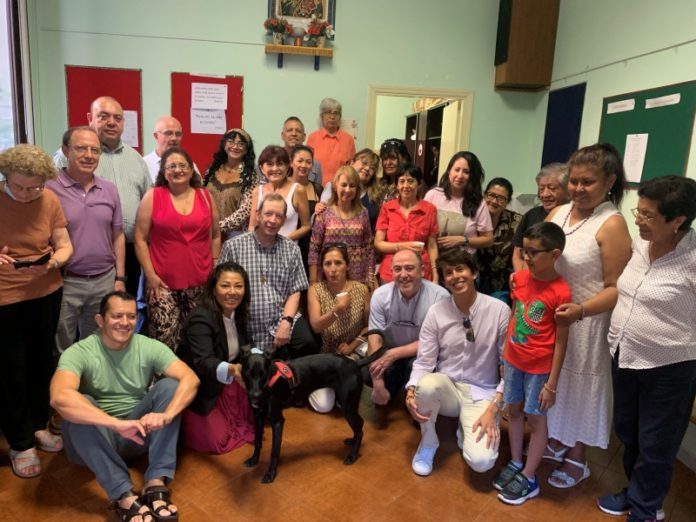 The Church St. Alphonsus, the Shrine that embraces the original icon of Our Mother of Perpetual Help in Rome, ministers to a wide range of persons from different countries, cultures, and nationalities – each in their native language. The larger communities are of those of Italian, English, Polish and Spanish origins.

One of these communities, that of the Spanish speakers, represents a wide selection of countries mainly from Latin America and the Caribbean. Just recently, on the feast of the Most Holy Redeemer, nine members of this community were enrolled as lay Redemptorist missionary collaborators (Partners in Mission). They were received by the Shrine´s rector, Fr. Gianni Congiù.

In response to Fr. General´s petition of prayers (cf. ScalaNews, week of August 28th), after the Eucharist on the Sunday before the opening of the General Chapter, a group of the Spanish community met and prayed for the Chapter and it´s delegates. Fr. General, Michael Brehl, the General Congregation´s Vicar, Fr. Alberto Eseverri, the Congregation´s General Econome, Fr. Vicente Soria, one of the Consulters of the General Council, Fr. Pedro López, and the two Hispanic community chaplains, Fr. Cristian Bueno and Fr. Manny Rodríguez, accompanied our laity in their prayers, asking our Redeemer to enlighten the evangelization plan for the next sexennium and the inspiration of the Holy Spirit when the Chapter delegates elect our next General Superior and his Council.