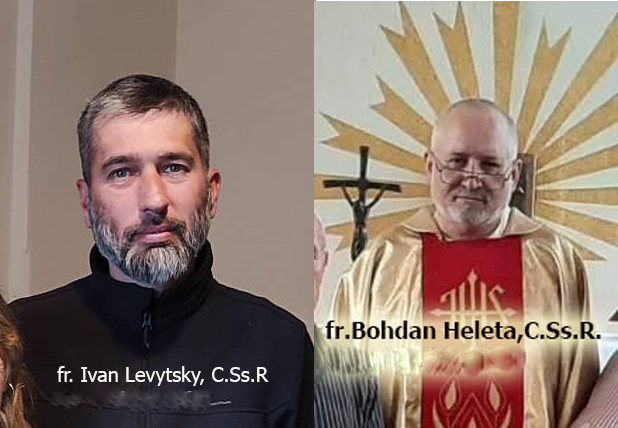 Two Redemptorist priests have been detained by Russian soldiers in Berdiansk (Ukraine). They have been falsely accused of storing weapons and explosives.

On 17th of November 2022, we found out from some open social media sources that two of our Redemptorist priests Fr Ivan Levytskyy and Fr Bohdan Heleta, had been detained by the Russian security services a day before that (16th November). We lost all contact with them starting from that precise day – 16th November.

On 23-24 November, a Russian TV channel “Zviezda” released a snippet of the interrogation of Ivan Levytskyy. There were visible signs of physical and mental exhaustion on the face of the priest.

Until now, their location remains unknown. We have no contact with them, which indicates that they have been completely cut off from the outside world. This proves that the occupiers don’t abide by the basic rules of human rights.

Both priests belong to an international congregation of the Most Holy Redeemer (Redemptorists) and served in The Nativity of the Blessed Virgin Mary Church (Greek-Catholic church).

At the beginning of the full-scale war on 24th February 2022 and later, from the moment the city came under the control of the Russian forces, the priests decided to stay in the city in order to continue serving people. They provided them with spiritual and humanitarian support and helped refugees and people in need, whose numbers have been rising.

Beginning on the 23rd of November, Russian mass media started reporting that members of a Russian National Guard unit (Rosgvardia) found weapons and explosives on the premises of the church and in the basement of the house where the priests lived.

Undoubtedly, the results of such investigations, which were done in the priests’ absence, are falsified and untrue. A Telegram channel «Лeнта новостeй Бердянска» displayed a message which revealed the premeditated character of the search conducted, as it contrasts the results of the searches in the Lavra and Ukrainian Orthodox churches of Moscow Patriarchate against the search in Berdiansk, which was characterized as “in a church controlled from Kyiv.”

It’s worth pointing out that the dissemination of such videos and information started after a search conducted by the Ukrainian National Security services in Kyiv-Pechersk Lavra on 22nd November.

We would like to state that the information about any weapons and explosives found in the church, as well as the extremist activities of the priests, does not bear any truth and is aimed at discrediting the Ukrainian Greek-Catholic Church, its community, and its priests in Berdiansk and on the occupied territories.

The priests led exclusively pastoral and social service for Greek and Roman Catholics in the city of Berdiansk. They were assigned to do so by their superiors and church authorities, and until the moment of their detention, there had been no dissatisfaction with their presence.

This information is directed at anyone who has the means to intervene on their behalf and facilitate the release of Fr. Ivan and Fr. Bohdan from this meaningless captivity.

Oppression and lies spread fear and misery. Only the devil acts using such means, as “he was a murderer from the beginning, not holding to the truth, for there is no truth in him“ (John 8,44).

Mary, Mother of God, Mother of Perpetual Help, protect the captives and help them return home!