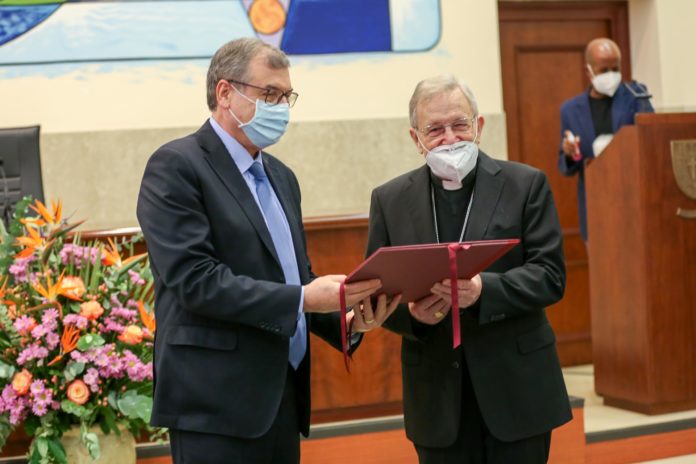 On Friday, November 20, 2020, the Alphonsian Akademy conferred the Doctorate honoris causa in moral theology to Card. Walter Kasper. The reasons mentioned in the official document are “his illustrious merits in Sacred Doctrine, but above all his proposing Divine Mercy as the fullness of the Gospel of Christ and the rule of the Christian life”. The Dean of the Academy, Prof. Alfonso Vincenzo Amarante, C.Ss.R., in his introductory speech highlighted how the line of theological reflection of the card. Kasper’s line of theological reflection is in full agreement – as is evident from the distinguished scholar’s latest writings – with the Alphonsian perspective of moral theology in the pastoral sphere.

The process of this prestigious recognition coincides with the 150th anniversary of the proclamation of St. Alphonsus Doctor of the Church on March 23, 1871. This recognition is part of the theological line of the Academy. The academic statutes call for the investigation of moral theology “in the light of the mystery of Christ … to respond faithfully to God’s merciful love in the service of God’s people.

The Moderator General of the Alphonsian Academy, Father Michael Brehl, C.S.R., in his Laudatio, also stressed the affinity of the approaches of Kasper and St. Alphonsus, both based on mercy. In describing the work of the saint, Father Brehl quoted a phrase addressed by the Pope to the Alphonsian Academy on the day of its 70th anniversary of foundation: “s. St. Alphonsus soon realized that this was not a world from which to defend oneself and even less to condemn, but to heal and liberate, in imitation of the action of Christ” (audience of 9 February 2019). Fr. Brehl also stressed the importance of a gradual path capable of transforming man’s fragility into openness and constant tension towards holiness. “This appears to be the urgent task of moral theology – Father Brehl said – in the Alphonsian Academy: to show how God’s mercy in Christ can become a form of the Church and reach every man and woman”.

Kasper in his Lectio magistralis reported some autobiographical aspects, including his studies as a young seminarian in Tübingen where he was able to begin reading the writings of Bernard Häring. The cardinal theologian described his first steps in priestly ministry, which saw him engaged for many hours in the confessional, “a sort of the second study”. Something similar to St. Alphonsus, who went from being a rigorous probabilist to a defender of conscience and an apostle of God’s mercy, bending over human wounds. The second approach to morality happened for Kasper by deepening the theme of mercy. Wanting to write about God, he did not find in manuals and dictionaries a vision of mercy completely in accordance with the message of the Gospel: so he decided to investigate this question himself.

Prof. Vincenzo Buonomo, the Magnificent Rector of the Pontifical Lateran University, stressed what Fr. Brehl had previously said: truth, justice and mercy are inseparable and in turn connected with real life. The Rector also emphasized the importance of an inductive approach to grasp the real needs of people who question not only the moralist but also the jurist. The handing over of the title to Cardinal Kasper took place at the hands of the Rector Magnifico, who concluded the event by expressing his appreciation for the Alphonsian Academy, which, included in the Pulse, provides positive stimuli and provocation for the Pope’s University in the field of moral reflection.

The ceremony was broadcast live on the Internet.

The event on the vaticannews.va

The award was given to the cardinal on Friday, November 20 at the prestigious institution of moral theology at the Pontifical Lateran University. Motivating the doctorate was the appreciation for Cardinal Kasper’s theological reflection on the theme of God’s mercy that lies “between the Father’s stooping over suffering humanity and the path of following the Gospel of Christ.”

“The line of theological reflection of Cardinal Walter Kasper is in full accord with the Alphonsian perspective of a moral theology capable of taking on the fragility of man”. This was pointed out by the Dean of the Academy, Professor Alfonso V. Amarante C.S.R., introducing the event. The reasons for the honorary act, as stated in the doctoral diploma, are for its “distinguished merits in Sacred Doctrine, especially in proposing divine mercy as the fullness of the Gospel of Christ and the rule of the Christian life”.

In the decision to confer the doctorate there is also the recognition by the Academy that, if the theological proposal of the illustrious scholar and cardinal “touches on a consistent variety of themes, ranging from fundamental theology to Christology, from the doctrine on God to ecclesiology to ecumenical questions”, in the theme of divine mercy, defined by Kasper himself as a “great provocation” for current theology, it is possible to trace the synthesis of his theological reflection. In fact, it “lies at the crossroads between the truth of God revealed to us in His Son and the secret aspiration of the human heart, between the Father’s stooping over suffering humanity and the path of following the Gospel of Christ”.

The laudatio, held by the moderator general of the Alfonsiana Father Michael Brehl C.Ss.R., highlighted the cardinal’s significant contribution to the concept of mercy, as can be seen in his latest writings on the subject and family morality. In the lectio magistralis, the cardinal stressed, for his part, that God’s justice does not give the sinner a just punishment, but makes him just, gives him a new beginning, a new possibility. In this way, Christians can be merciful as God is merciful and can always begin a new journey of holiness. Finally, the magnificent rector of the Pontifical Lateran University, in handing over his doctoral degree to the illustrious theologian, said that today’s event invites the Lateran itself, the Pope’s University, and the Alphonsian Academy to continuous reflection and investigation.