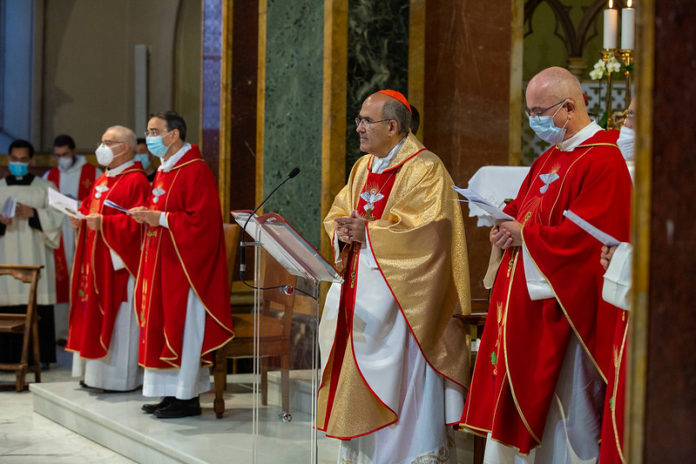 (Rome) – On Tuesday, October 19, 2021, the Accademia Alfonsiana inaugurated the new Academic Year. The first part of the solemn inauguration was the celebration at the Shrine of Our Mother of the Perpetual Help. The votive Mass to the Holy Spirit was presided over by cardinal José Tolentino Calaça de Mendonça, archivist and librarian of the Holy Roman Church. In his homily, the cardinal commented on the Lucan passage of Pentecost. He stressed that the announcer of the Gospel does not silence his interlocutor with perfect answers but knows how to raise the right questions in those in front of him. Jesus himself asked many questions in the course of his mission. The prelate’s invitation was that we should still allow our souls to take up with trembling the weight of the questions posed by the Lord, sustained by the consoling power of the Spirit of truth. At the end of the celebration, the dean, Fr Vincenzo Amarante, C.S.R., thanked the superiors present and recalled those whom God has called to Himself in these months, also because of the pandemic.

The academic community then moved to the adjoining Aula Magna of the Alphonsian Academy, where the Moderator General, Fr Michael Brehl C.Ss.R, addressed his greetings to those present. Father Brehl presented in three points the challenge that Pope Francis pointed out in his letter to the Academy and to Redemptorists on the 150 anniversary of the proclamation of St. Alphonsus Doctor Ecclesiae: to listen to reality, to form mature consciences, to promote intercultural dialogue.

After the greeting of the moderator, Cardinal Tolentino Calaça de Mendonça gave the speech entitled: “The Divine Comedy as a pedagogy of the gaze”. The dimensions traversed by Dante in the Comedy and described in as many canticles represent a moral and spiritual itinerary of learning to see. In the infernal stage, the gaze reconstructs the relationship with its object. Seeing is a hard job; it is a task that one has to learn. A passive gaze is not enough, we need the right direction and the necessary light. You cannot see alone: you need a guide to recover your sight. Only those who allow themselves to be helped, as Dante does with Virgil, can go out “to see the stars again”. In Purgatory, a right relationship with others purifies the pathologies of vision. Evil is to break communion with others and with God and to absolutize oneself. Relying on the eyes of another becomes the only way to heal. In Paradise, seeing finds its full fulfilment as a relationship of love. Virgil in Paradise surrenders his role of guide to Beatrice. Intelligence is insufficient to see; it is the love that regenerates Dante’s gaze, allowing him to embrace the good fully. Dante recives a gudance to Christ through further mediations: St Bernard and the Virgin Mary: this is necessary because seeing is not possession, but reciprocity, the option of freedom, communion. The cardinal reminded the academic community members that a university is the place where a vision is built, where people learn to abandon artificial visions for new ones, free and joyful, because they are generated by love and generate love.

At the end of the proclamation, Preside of the Academy, Fr. Alfonso V. Amarante, C.Ss.R., reported on the 2020-2021 academic year. Prof. Amarante recalled some particularly significant events, such as the “Brothers all” webinar on October 29, 2019, the Doctorate honoris causa of Card. Walter Kasper on November 20, 2020, and the study day on March 23, on the anniversary of the declaration of St. Alphonsus Doctor Ecclesiae. The President presented the new professors and thanked the new emeriti for their service. Finally, he identified four challenges for the year that has just begun: to form new professors according to the heart of God and capable of listening, the revision of the Academy’s regulations, the implementation of relations between the offices, attention to the least, as requested by Pope Francis and according to the spirituality of St. Alphonsus.

The Rector Magnificus of the Pontifical Lateran University, Prof. Vincenzo Buonomo, was the last to take the floor. He highlighted the importance of what Cardinal Josè Tolentino Calaça de Mendonça had previously said about the need of creating a vision. There is a need of the vision that is capable of being embodied in the different articulations of knowledge and the sciences. Finally, he recalled how the autonomy of the Academy, as an Institute ad instar Facultatis, was strongly desired by Pope Francis.

With the ritual ringing of the bell by Dean Amarante, the Academic Year 2021-2022 officially began. The Secretary General, Danielle Gros, who moderated the event, bid farewell to the participants and wished all the students, teachers and staff well in their work. We join her in wishing everyone a fruitful academic year.