The Irish tricolour was flying outside the Sukhumvit Road offices of the Father Ray Foundation on Friday, September 25, to welcome His Excellency Brendan Rogers, the first resident ambassador of Ireland to the Kingdom of Thailand.

Upon his arrival at the Foundation, the ambassador was welcomed by Father Peter Pattarapong and Brother Denis Gervais, president and vice president of the Foundation respectively. Also there to welcome the ambassador was a large group of toddlers from the Father Ray Day Care Center, all dressed in traditional Thai costume and enthusiastically waving the flags of Ireland and Thailand, as well as a sizeable contingent from the local Irish community.

Accompanied by Deputy Ambassador Alan Farrelly, Ambassador Rogers was making his first official visit to the Father Ray Foundation, in particular to the Redemptorist Vocational School for People with Disabilities where a donation of 250,000 baht was presented by the ambassador.

He also visited the Father Ray Center for Children with Special Needs and the newly opened Ray Bakery School, which is teaching new skills to teenagers with special needs and also to their parents. 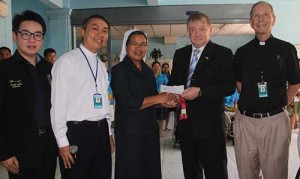 At the vocational school Ambassador Rogers was welcomed by Sister Pavinee Pichaisrisawadi IJ, manager at the school, as well as Rattanachai Suttidechanai, representing the mayor of Pattaya, and it was here that he presented the donation which will be used to improve the bathroom facilities at the school.

In return Brother Denis presented the ambassador with an Apostolic Blessing from Pope Francis, in recognition of the support the Father Ray Foundation has received from the people of Ireland over many years.

The ambassador spent some time meeting more than 200 students at the school, impressing them with his knowledge of the Thai language. He also met with Meunchai Kaewna, a former student who was born with no arms and who has overcome many obstacles to become a teacher of TV repair at the school.